It is an exciting time for Call of Duty Black Ops 3 owners. We are now almost ready for the BO3 Eclipse DLC release time on PS4 in PST, EST and UK timezones.

As usual, we have a heads-up for you on what time the Eclipse DLC is out in the US and UK as we can see that many of you are already looking for this information.

Treyarch hasn’t given an exact time yet, but in case you are new to the system it should be from 12am Pacific Time onwards. We have seen new map packs launch after midnight, but traditionally we see them appear on the PSN store just after 1am Pacific Time. 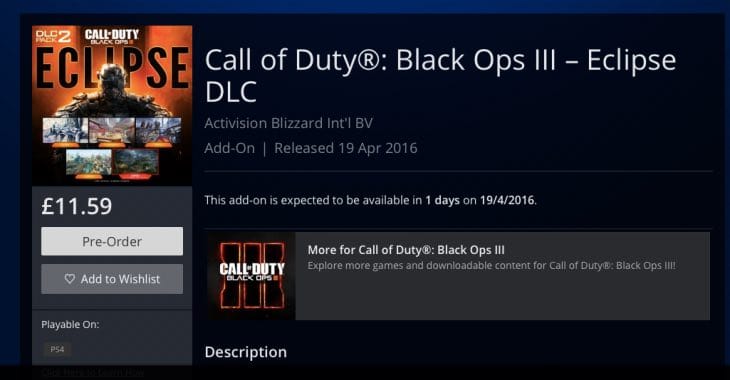 Assuming that the same pattern will apply, that means from 12-1am Pacific Time, 3-4am Eastern Time and 8-9am in the UK on Tuesday morning.

We can’t confirm these times 100% for you, but it is at least a heads-up which some may appreciate. If Treyarch announces a specific time, we will update this article for you with further information.

You may want to keep an eye on David Vonderhaar’s Twitter account in case times are posting there – for example, he has revealed that a separate download for Eclipse on PS4 will be available prior to the download – that means a pre-load!

Let us know if have your Season Pass ready and as always, let us know in the comments when you are downloading the content in your region.

Are you ready to play Zetsubou No Shima zombies?