When it comes to the big three Luxury German Auto makers, we often wonder which of them is the most reliably? The three are Audi, BMW and Mercedes-Benz, and all will be hoping to have a car that people can not only feel safe in, but also know that it will not breakdown while they own it.

So let us see what BMW has to offer for 2011. There are 14 models in all, which was a shock to me, as I assumed that they only had about half a dozen or so. Of the 14 models I believe that the 3 Series and the 5 Series will be the most popular of the range, and will be in direct competition with the Audi A4 and the A6. 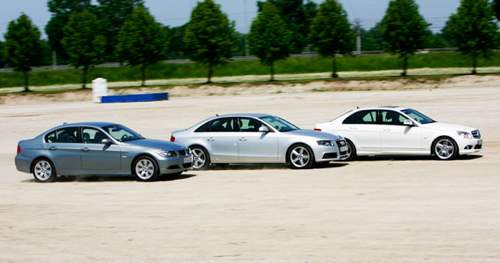 The worrying thing that I have with the BMW 3 Series was how slow they were to react to the poor handling issue caused by those run-flat tires. It is things like this that makes me wonder how long they would react if a more serious problem was found? Inside Line has a complete breakdown of all the 2011 BMW models.

Having searched the Internet for the complete list of 2011 Audi models, we notice that it was Inside Line that once again gave us what we needed. They have just one less model than BMW with just 13. It is so hard to know just what model will be the most popular, but we do not that reliability should be good, as Audi has been nipping at their rivals heals for a few years now.

Finally we have Mercedes-Benz; again there are 13 new models for 2011, but which of these will be the most reliably? I had assumed that most Mercedes vehicles would go on and on without many problems. However, after watching a number of BBC Top Gear episodes this turns out not to be the case. View the full list of 13 2011 Mercedes models at Yahoo Autos.

All three manufactures hope to outdo each other next year, but they need to remember that it needs to be more about reliability and less about sales.