If you are still busy playing through Bloodborne and are wondering what is next for the PS4 exclusive, we have some good news for you.

Sony has just revealed that there is going to be a Bloodborne DLC expansion in 2015. The news has actually not come from developers From Software, but rather Sony exec Shuhei Yoshida.

The social media loving exec has once again used his Twitter account to reveal something of a bombshell. A Bloodborne DLC expansion is coming and Yoshida teases that more details will be coming soon.

That can only mean two things. Either Sony are saving the announcement until E3 2015, or they will wait until after Summer and deliver the news at the Tokyo Game Show in September – Bloodborne is developed by a Japanese team after all so that would make sense. 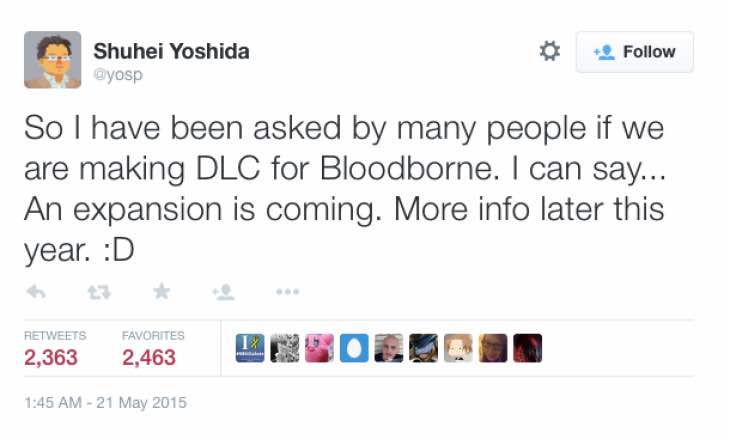 As you can imagine, the surprise news has been met with universal praise by fans. Let’s not forget that Bloodborne has only been available since the end of March so it’s great to see that new single-player content is already on the way.

What is your reaction to hearing that fresh Bloodborne content is coming? Are you happy to buy whatever comes available, no questions asked?

We’ll let you know once more official details are released, but we think it’s very cool that this kind of major news is broken on Twitter by a Sony exec.