A rather strange and unusual trademark has been registered by Diablo 3, StarCraft 2 and World of Warcraft developer Blizzard, it’s called ‘Mists of Pandaria’ which could potentially be the name of the next WoW expansion to hit shelves in a few years time.

If indeed this is the name of the new expansion from Blizzard, we could expect to see the official announcement at this years BlizzCon which kicks off on Friday, October 21, 2011.

MMO-Champion, who usually datamines information such as this, released the news in the late hours of August 2, and show that the trademark was filled on July 28, 2011. 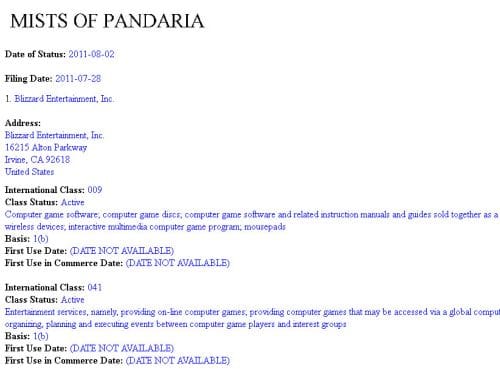 But why do they think that this expansion ties to the worlds biggest online MMO, World of Warcraft? MMO-Champion state that the international codes of 009 and 041 only seem to appear on Blizzard’s online games trademarks meaning that it is not tied to a book or something similar.

Not much can be gained from the title, but some are pointing it at a new Panda race that has yet to be introduced in Azeroth. If this is the case then could the Panda race be specificially tied to the Alliance or Horde factions? Some even say that the Panda race could be a neutral faction that could be played by both, or none.

This opens lots of doors for Blizzard to play around with. We could even see the Naga finally make it as a playable race, something that WoW fans have wanted to see since the rise of the game way back when.

Although this is not confirmed as the next World of Warcraft expansion, this is not the first time Blizzard has filed a trademark like this, much like Cataclysm was trademarked in 2009.

If the Mists of Pandaria is indeed the next expansion is the next in line for Blizzard, what content would you like to see? An expansion of Azeroth like Cataclysm or a space-filled adventure like Burning Crusade? A new class such as the monk? Thinking about it, this could also be Blizzard’s yet unannounced MMO? What do you think?