If you are interested in the upcoming revamp of BlackBerry 10 with the barrage of new smartphones that RIM is preparing to unleash, you’ll be pleased to hear that we have some photos of one of the new QWERTY BlackBerry 10 devices to show you. Previously we have given you details on a touchscreen device known as the ‘London‘, but now we hear that one of the new QWERTY-based devices will go by the name of BlackBerry X10 and the design is looking pretty nice at first glimpse.

The handsets are due for an official reveal at the end of January, but that hasn’t stopped a collection of images leaking out before hand and we have a feeling that RIM doesn’t mind the extra exposure since it all adds to the hype for the big reveal. We were impressed with the London when we first saw it, but we’re not sure we can say the same about the X10.

From the pictures you can see here courtesy of N4BB, it’s a very familiar design from what we are used to seeing from some of the older BlackBerry handsets with a physical QWERTY keyboard.

This design of the X10 reminds us of the BlackBerry Bold and that device didn’t particularly have the most eye catching of designs either. That means that the focus will be on the software and if early positive impressions are true, then the X10 should still appeal to a lot of consumers who insist on a physical keyboard above any other features.

Full specs of the X10 are not known yet, but we hear that some of the specs will include a display resolution of 720×720 pixels with a ppi of 330, as well as built in NFC support. If we had to choose between this and the BlackBerry London, it would have to be the London every time as design is as equally as important than on onboard features than ever before now – especially with competing handsets like the iPhone 5 and Samsung Galaxy Note 2 which are two of the nicest looking phones out on the market at the moment.

What are your initial thoughts on the BlackBerry X10 running BB10? Are you a consumer that loves a physical QWERTY keyboard, or will you go for a touchscreen based model instead? Hopefully we’ll have further details on this device for you soon. 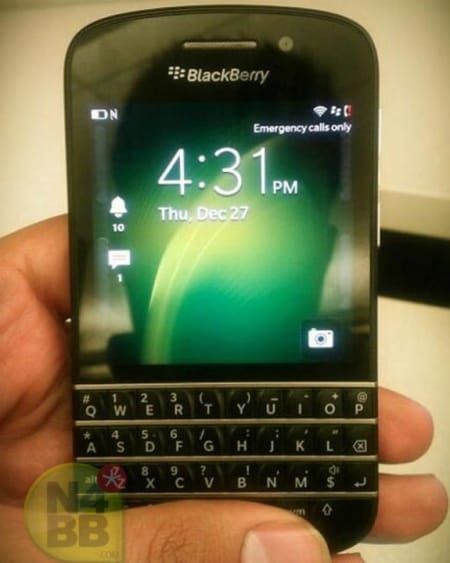