Last month a few rumors started to slip about a BlackBerry Torch launch party for Canada, which was pretty much confirmed by some leaked images offering top sales reps the chance to be at the “Torch Launch Event”. This was dated September 21 in Toronto, and followed by events in Montreal and Vancouver.

Rogers confirmed the BlackBerry Torch release date on September 1, and in their blog post they stated that the BlackBerry 9800 would be joining Rogers on September 24. The price was a three-year term from $199.99, which could be bought online or in-store. You can also see a video below this post with Michael McDowell – Director of Marketing at BlackBerry — that explains some of the cool features found in the Torch.

The U.S. has had the 9800 for a while and we now know that the UK release is October 1, and that Red / White models will be coming to AT&T, but will you be interested in the BlackBerry Torch or will you wait for the BlackBerry Storm 3? 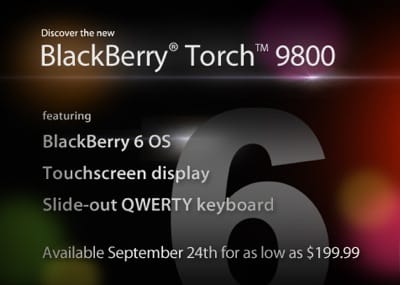 If you are in Canada, this page on rogers.com is where you need to register your interest in the BlackBerry Torch. They will provide you with updates as and when they become available.

Are you looking forward to the BlackBerry Torch launch in Canada on September 21? Will you be there on launch day?