This year is set to be a busy one regarding tablets, we have the upcoming iPad 2 and the BlackBerry PlayBook amongst others. Competition will be fierce between the various devices so features each tablet has could determine how successful it becomes.

Matt Hamblen of Computer World is reporting that the PlayBook will allow owners to tether to their BlackBerry smartphone. RIM officials have confirmed that this will give users access to the smartphones network, messaging, Web-browsing, and the entire calendar. Another useful feature is if a user’s PlayBook and BlackBerry smartphone are connected to a company’s BlackBerry Enterprise Server, then the company’s IT department can control how the tethering works. 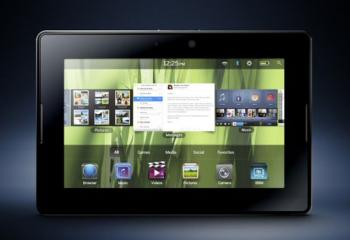 The device is set to be released in the US sometime during the first quarter, with pricing still to be announced. Until now the tethering features of the device have not been widely mentioned. RIM’s senior product manager — Ryan Bidan- said that IT managers using BES can control how long information is cached on the tablet. If the PlayBook is too far away of the smartphone, the cache can be immediately set to deplete any data on the PlayBook, or data can be set to remain for hours, days, and even weeks.

Cnet have spent some time with the PlayBook at CES, and said it’s a beautiful device but asks who will actually buy it. The article runs through some of the options which are only open to owners of BlackBerry handsets, this would give perspective buyers less incentive to buy a PlayBook instead of some of the other options available. As the device is still being developed RIM still have time to get new customers for its products. There is also a 4G model promised later in the year on Sprint.

Are you thinking about buying the BlackBerry PlayBook?