We haven’t really had any conclusive evidence that the rumored BlackBerry Storm 3 handset is real, until now that is. A recent inventory screenshot has just confirmed that the handset is genuine and will be coming to Verizon Wireless soon.

As reported from BGR, the handset has just appeared in a Cellbrite inventory listing. If you didn’t know, this is the internal system which Verizon employees use to transfer information amongst each other. Cellbrite was also the tool which unveiled the mystery surrounding the Droid Incredible all those months ago. 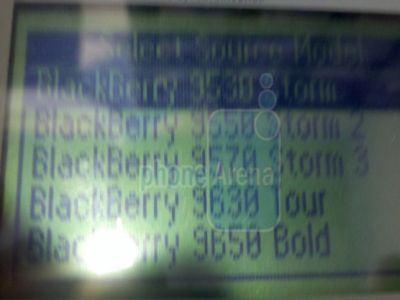 As for the new screenshot though, you can clearly see that BlackBerry Storm 3 is listed underneath the 1st and 2nd generation Storm handsets, and a release is now likely to follow before the end of the year.

Will the form factor be the same as the previous Storms, or will RIM decide to give the Storm 3 a facelift? It would be awesome if it came with their new BlackBerry Tablet OS – that would really get me interested.

Let us know your thoughts on this. How many of you are holding on for a Storm 3 announcement?