BlackBerry has yet to officially confirm the R10 as their next smartphone in their BlackBerry 10 revamp, but there are already a growing number of consumers who are interested in picking up a device that has been touted as a ‘budget’ version of the Q10 – a QWERTY based device that will offer an alternative to the already-available BlackBerry Z10.

Despite the mystery surrounding the device with regards to official information, a leaked video has emerged of the elusive device, appearing to show some of the touch-based gestures that will be available on the R10 upon release. The R10 is also going to feature a physical QWERTY keyboard like the Q10, although hardware specs are likely to be toned down to accomodate a cheaper market price than the Q10.

To recap, rumored features so far include a 3.1-inch 720×720 display and 5-megapixel camera, compared to an 8 megapixel camera and 1080p video capabilities on the Q10. The video, which we’ve included above shows a very brief walkthrough of some of the gestures that will be available – including a look at what the drop down notifications menu will look like. 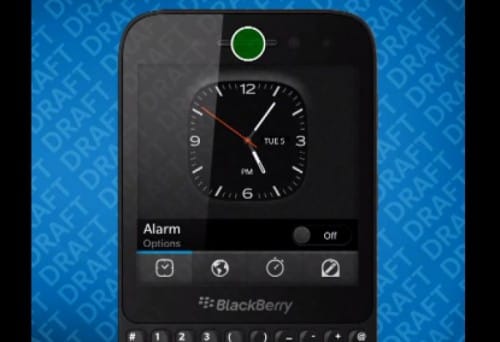 Users will also be able to swipe upwards on the R10 to bring up a multitasking menu, which will separate all of your current windows in a visually pleasing format. We’re guessing many more gestures will be available on the device, but for now just treat this as a little taster on some that are available.

How long will BlackBerry keep fans waiting for the R10 reveal? Price is going to be essential, especially considering the close design traits that it shares with the Q10. If you have your eye on this device, let us know if you are looking to pick one up ahead of the Z10 and Q10.