In continuation of our popular tablet comparisons that we have been showing you throughout this month, we now have another heated dual for you to enjoy. BlackBerry may be focusing on expanding their BlackBerry 10 OS, but we’ve seen that there is still a lot of demand in the BlackBerry PlayBook tablet, from consumers who are eager to pick up a bargain during the sales.

The BlackBerry Playbook may be considered an old tablet after releasing in August 2012, but it is still a very capable tablet for those that have casual and business usage in mind. A quick refresh of specs for you: It comes equipped with a 7-inch display, a 1.5Ghz Dual-Core processor, 1GB of RAM and 32GB of internal memory.

It also has a 5MP camera on the back which supports 1080p video and a very impressive high-quality 3MP camera on the front which we don’t see very often on tablet devices – even the Nexus 7 2013, which many consumers consider is the tablet to beat at the moment.

In comparison, the Nexus 7 2013 only features a 1.2MP camera on the front, so this is one advantage of the PlayBook in this case. Having said that, the Nexus 7 is powered by a quad-core processor so Google’s device wins out in other areas. 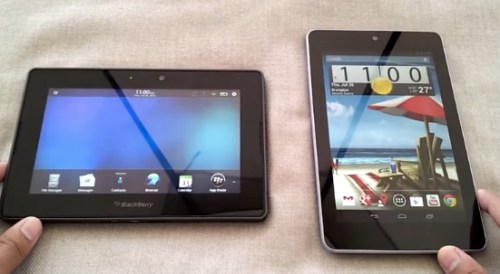 It should help you decide whether you still think BlackBerry’s tablet is worthwhile, although bear in mind that we may see an upgrade in 2014 which will run on the new BlackBerry 10 OS.