We haven’t heard too many details on the BlackBerry Playbook recently, but we have some pretty important news for those of you planning to pick up the WiFi version of the device, due out within the next few months.

As reported from Engadget, a leaked screenshot has not only revealed that the BlackBerry Playbook will be coming to select retailers aside from carriers, but also potential pricing information for the WiFi version of the Playbook.

If the image below is real, then we’re looking at $500 for the 16GB WiFi edition at Office Depot, meaning that RIM were not lying when they informed us that the price for the Playbook would come under the $500 mark. It also means that the Playbook will be considerably lower than the Motorola Xoom, which we’re hearing could be priced between $700 – 800. 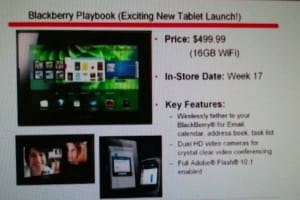 If you take a look at the image, it also says week 17, which hints that the Playbook will be available sometime around April – the WiFi version at least. Let’s hope this $500 price is real as it will definitely prove to be a key factor when deciding which tablet to pick up in a few months time.