For those of you who are not interested in the iPad 2 the BlackBerry PlayBook release is drawing closer, after Research In Motion announced when the device will be available and where to preorder.

Ian Paul over at PCWorld is reporting that the device is available for preorder now at Best Buy, and will be landing at stores on April 19. We told you earlier about the $500 starting price for the BlackBerry PlayBook, and now we can give you prices for other versions of the tablet.

The 32GB version will set you back $600, while for only another $100 you get double the amount of storage with the 64GB version. The device will eventually find its way to over 20,000 retail outlets in the US and Canada. These will include stores such as RadioShack, Staples, as well as mobile carriers such as AT&T and Verizon. 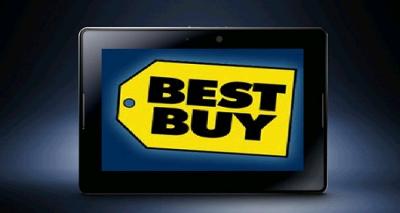 We do not yet know when these other retail companies will be getting the PlayBook, so for now only Best Buy have an official date. For now the PlayBook does not have a 3G option at Best Buy, but RIM is expected to release some news on this soon.

It will be interesting to see how RIMs tablet sells compared to the iPad 2, and how it will compare performance wise. Are you considering the BlackBerry PlayBook?