Since RIM announced the BlackBerry PlayBook towards the end of last year, we have only just had conformation that the latest tablet device will be available on Sprint in the summer. We can learn two things from this, the first is that it will be 4G enabled, and the second is that other carriers will have their version out a few months before the WiMAX version.

The announcement – which was not much of a shock – was made during CES 2011. However, there was no mention of an LTE version, but Ross Miller from Engadget believes that we will have to wait a while after the Sprint version. Suzanne Choney from MSNBC has made a note of how big tablet devices have become at this year’s show, which we will discuss in a later post. 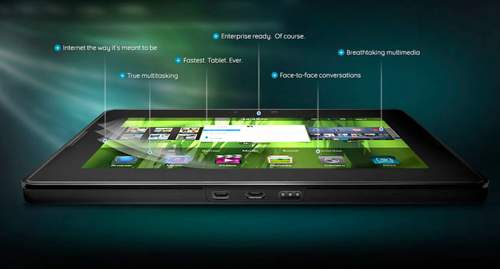 The BlackBerry PlayBook will go head-to-head with not only the iPad – although it could be the iPad 2 by then — but the range of Android tablets that have already started to hit the market. Once such device is the Samsung Galaxy Tab, although we expect these to be competing in different markets.

RIM has always been about the business user, but is that truly enough in this day and age? If the BlackBerry PlayBook has any chance of succeeding then it will need to compete in the consumer market – not certain if Apple and Android will make it easy on RIM though?