If you have managed to hold off from buying the impressive Samsung Galaxy S3 at launch, it may be worth having a second look now, since Samsung is preparing to unleash a special Black version of the Galaxy S3.

It looks like it will be arriving in the UK and other parts of Europe first, with evidence this week that retailers are now starting to accept pre-orders for the device. Most of you have already picked up a Galaxy S3 in either Marble White or Pebble Blue, but you may be regretting that decision after seeing what the slick Black version looks like.

A retailer listing has popped up via popular seller Clove, revealing plans to sell the Black Galaxy S3 for a total of £600 including VAT, for the 64GB model without a contract – ie. SIM free. This may be on the expensive side at first glance, but don’t forget that Apple may be planning to sell an unlocked iPhone 5 64GB model for $849 (£530), so not a lot of difference in terms of price between the two.

The hardware specs will be the same as previous versions, although at the moment there is no word from either Clove or Samsung on whether the Black model will ship with Jelly Bean, or still come with the now outdated Ice Cream Sandwich. Another word of warning is that there is no actual ship date for the Black version either, with Clove stating that they will inform customers of ‘future’ availability, once certain pre-order numbers have only been met. 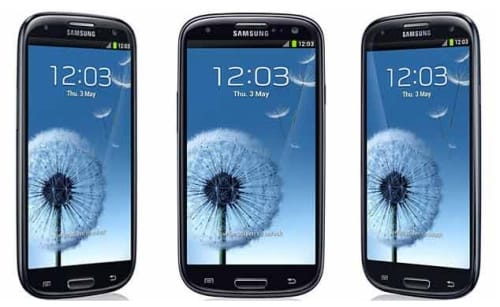 This means that you won’t be getting your Black Galaxy S3 within 5 working days of pre-ordering. Instead you’ll face a risky wait to see whether Clove will then actually stock the device and deliver to you in time for Christmas – it sounds like risky tactics to us, so it will be interesting to see whether it pays off for them.

At the moment, Clove appears to be the only seller accepting pre-orders in the UK. Let us know if you have spotted the Black Galaxy S3 elsewhere and whether the same risky availability measures are in place.

Are you after this Black 64GB model, or are you happy with the current version? Don’t forget that this version will give you the potential for a whopping 128GB of total memory after using an additional 64GB MicroSD card.