Last week we revealed that the Xbox 360 version of Call of Duty: Black Ops would see a double XP weekend starting today (26th November 2010), however this is in fact untrue and was a mistake from the official Xbox Live team.

Our previous article was the result of an official email I received from Xbox Live, this stated that the double XP weekend would kick off today, however the email that I received yesterday claimed that the dates were published incorrectly and it would not be happening this weekend after all. You can see a screenshot from the email embedded below. 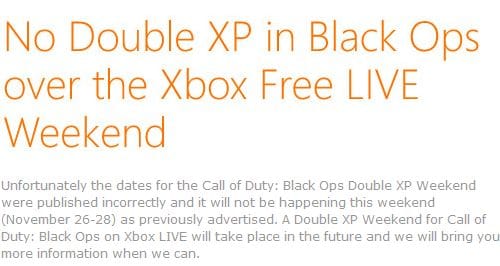 To be honest with you I thought it was a bit odd that a double XP weekend was happening so close to the game’s release, let’s face it most gamers don’t need an excuse to play Black Ops at the moment.

Currently we have no idea as to when a double XP weekend will go ahead, therefore we will have to keep you posted. The first Modern Warfare 2 double XP weekend for the Xbox 360 version arrived when the first map pack was released (roughly 4 and a half months after the game’s release), perhaps we will see a similar thing with Black Ops.

When do you think the double XP weekend should go ahead?