Most Call of Duty Black Ops fans will know that the First Strike Map Pack is released today, which you can read more about from a recent post by Alan Ng, along with release times. To celebrate this new DLC Candid Camera is offering their Black Ops edition for free, but just for a limited time only — so you had better hurry.

For those who have yet to try this app, it will not take you long to start laughing. The idea behind Candid Camera: Black Ops Edition is to take a photo of anyone and then read all the details in front of you, such as the Black Ops personality traits. If there is ever a time to get a funny app then today is the day — only because it is free.

The usual price is just $0.99, and one review on iTunes said that it is still worth that price if you are not a fan of the games, as it was hilarious. The app is only for the iPhone 4 and the fourth-generation iPod Touch, but just think how much fun will be had when you find out whom or what your mate is in Black Ops? 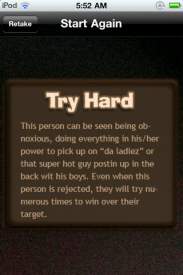 If you were still waiting for the new DLC, then we would advise you to watch this gameplay video here. We have already seen a host of videos like this, but this latest video offers unseen footage, so will allow you to get a perspective of the new maps.

What are you looking forward to the most in the new Black Ops First Strike DLC?