As you are probably aware there has been a lot of excitement surrounding the new ascension zombie map which is coming to Black Ops when the First Strike DLC launches, finally we have a video showing off this map and the four other multiplayer maps, we have embedded this trailer at the end of this post.

To be honest with you the most interesting thing about this video is the Ascension Zombie map, the trailer video shows just 10 seconds of Ascension footage, the map looks like an abandoned Soviet launch facility and shows us some perk stealing red-eyed monkey zombies and a floating platform which will probably keep the zombies away from you during you hectic battle.

Last week we spoke about the new weapons and perks that you will be able to use when battling through the zombie maps, we are still unsure as to what PhD Flogger will bring, however MTV suggests that it may be similar to Marathon. 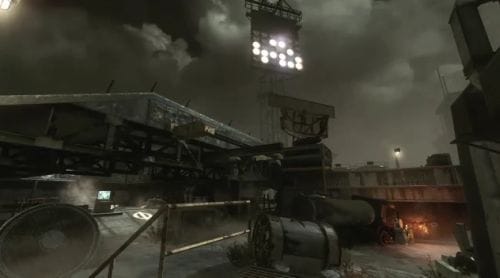 If you are not a fan of zombies the video is still well-worth watching, it shows all five maps in more detail than we have seen them before, you can watch the trailer video in HD on GameTrailers.

Xbox 360 gamers have just 1 week to wait until the First Strike DLC arrives on Xbox Live, whilst PS3 will have to wait an additional month, did this new trailer convince you to buy the downloadable content when it’s live?