Earlier on this week we informed you about a poster which revealed that another map pack was on the way for Call of Duty: Black Ops. However, we now have more details for you now, including the map pack name, price and official release date.

Without further ado, we can confirm that the name for the next DLC pack will be called Annihilation. As usual, the pack will consist of four new multiplayer maps and a brand new zombie map.

As surprising as this may seem for some of you, the DLC will be available to play this month – June 28th to be exact. The date was confirmed in an official promo poster for the new content which was intercepted by the guys over at VG247. 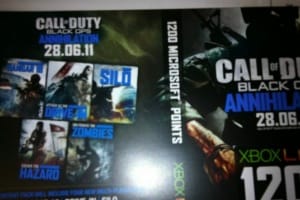 The price will be 1200 Microsoft Points, which is the standard price these days for new Black Ops content. As you might have guessed, the map will once again release on Xbox 360 first, as part of Microsoft and Activision’s ongoing exclusivity agreement.

The four maps have already been confirmed to be called Silo, Drive-In, Hanger18 and Hazard. We’re pretty surprised that this is coming out so soon after the release of Escalation. PS3 gamers have only just got their hands on the content this week, but while they are busy playing that, Xbox 360 gamers will have four brand new maps and a new zombie experience to enjoy – talk about rubbing it in Microsoft.

Let us know your thoughts on the release – surprised that yet more maps are on the way so soon? Is this new content still a day-one purchase for you, or are you starting to get a bit bored? – The obvious answer for most of you will be no we’re guessing.