Earlier on this week we informed you about the unveiling of the third DLC pack for Call of Duty Black Ops, as well as the first details for the new zombie mode. Now we have the debut trailer for the Annihilation map pack, including gameplay for Shangri-La zombies.

Treyarch usually waits until the very last moment to share details on their upcoming zombie releases, but we’re pleased to say that the company has decided to release a portion of gameplay for the new map along with the other multiplayer maps.

During the Shangri-La teaser, you’ll see that monkeys are back in the game, and also the original characters from the series, who we’re guessing will resume duties from the celebrity figures that were featured in Call of the Dead. We have to say that we’re loving the jungle setting for the map, as it is a stark contrast to the ‘dark building’- type zombie setting like we’ve become used to seeing from Treyarch.

We also see various traps in the map, as well as minecarts, new weapons and also what looks to be a brand new type of ‘fire’ zombie enemy to deal with. Hopefully more details are revealed soon about the map, as the anticipation is killing us. 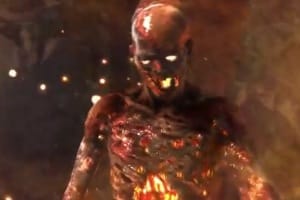 As a reminder, Annihilation is due out June 28th on Xbox 360, priced at 1200. Check out the gameplay trailer below and let us know your thoughts on it.