For those of you that have been asking for Black Ops 3 Zombies gameplay, it looks like Treyarch are ready to give you that with the first Black Ops 3 zombies trailer and more very soon.

How soon you ask? July 9 according to a teaser that has just been posted to Treyarch’s official Twitter page. The developer is teasing ‘a new chapter’ for zombies and July 9 is going to be when we will find out how zombies has evolved from Black Ops 2.

July 9 of course is also the date in which the San Diego Comic Con 2015 expo begins, so with Treyarch including San Diego in their Tweet it looks like Comic Con is going to be the place where Call of Duty reveals are also prominent aside from all the usual Marvel goodness you may be used to. 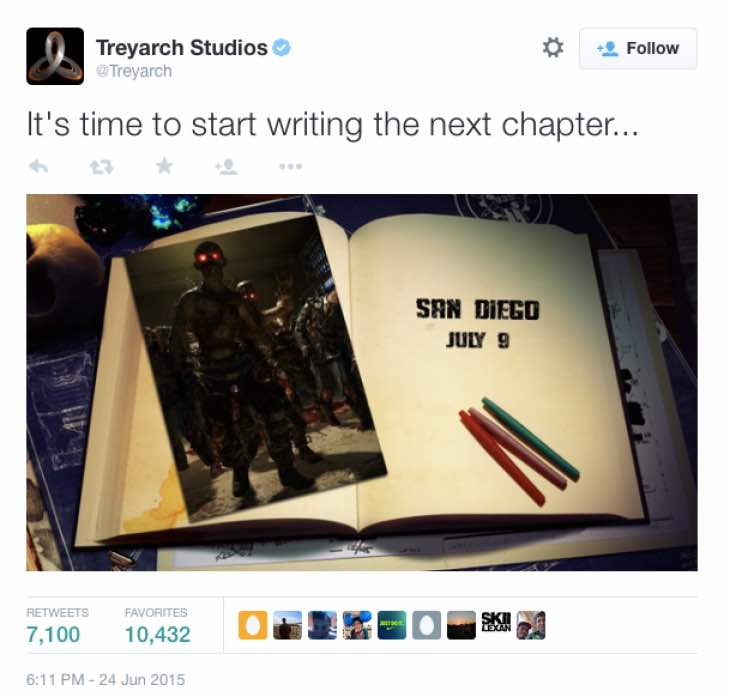 Treyarch hasn’t said when to expect the first gameplay in terms of an exact Black Ops 3 zombies trailer time but we’ll be the first to let you know as soon as they do.

We have exactly two weeks to go until that date so let’s get brainstorming zombie lovers. What do you want to see from Treyarch’s zombies compared to Sledgehammer Exo Zombies?

Treyarch knows that they are going to need to do something special yet again since some players may be getting sick of zombies after playing Advanced Warfare non-stop.

What will make you buy Black Ops 3 this year?