As we patiently await the glorious arrival of Black Ops 3, we have something rather interesting to share with you with regards to Black Ops 3 Zombies and the upcoming Shadows of Evil map.

Most of you won’t realise this, but Treyarch has already begun their Black Ops 3 zombies marketing campaign this month.

However, they have done it in the most unusual way by partnering with Six Flags theme park in Los Angeles. Now you will be able to go to the theme park for Halloween and take a ride on the Shadows of Evil rollercoaster. 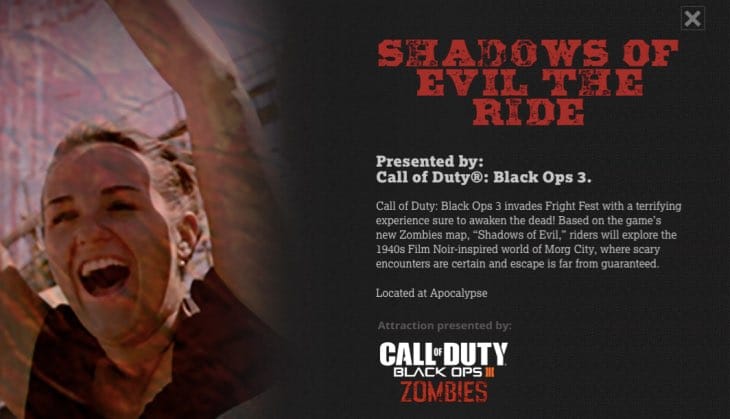 It’s an absolutely fantastic idea and this is an official partnership between Six Flags and Activision/Treyarch. The ride’s description can be seen above and you will be able to experience it from Saturday 26th September through till Halloween next month.

If you want to fully immerse yourself in the new ‘Mafia’ film-noir theme of Shadows of Evil once BO3 launches, maybe you should take a ride at Six Flags next month and enjoy it to the max.

Remember that Black Ops 3 zombies is also going to include a remake of Der Riese titled ‘The Giant’, so it is already shaping up to be another stroke of genius from Treyarch.

Are any of you near the Los Angeles area tempted to go on the official Shadows of Evil ride at Six Flags theme park?