There has been yet another stealth Black Ops 3 update this week and now we have the details with some brief Black Ops 3 43.8.34.5 patch notes.

Some of you may also be playing on Black Ops 3 patch 43.7.34.5 but they are the same version ultimately which bring the same tweaks.

They include some changes to the FMJ attachment, specifically the fact that FMJ will no longer do increased damage to the robot on Safeguard, or the Ball Carrier on Up Link. 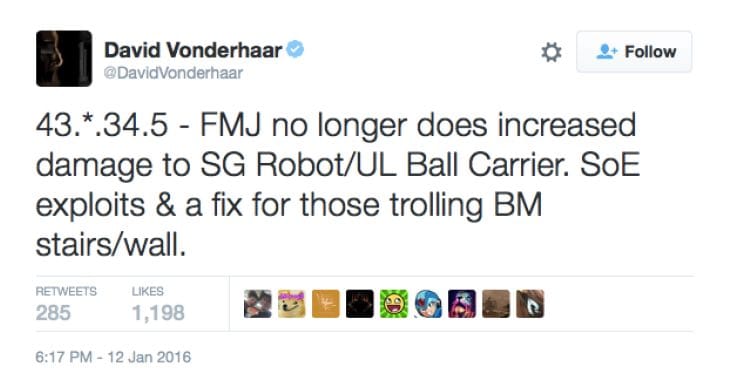 On top of this, Treyarch has also issued even more exploit fixes this time for Shadows of Evil Zombies. The exploits haven’t been disclosed, but David Vonderhaar has said that trolls will no longer be able to cause hassle on the ‘BM’ stairs or wall.

There’s lots of Safeguard players out there, so it will be interesting to see what the community thinks about this change. It basically seems that equipping FMJ is now useless in this mode which may be questionable.

It is still nice to see Treyarch making these quick changes either way – some won’t be happy with the changes all of the time, but most will.

What are your thoughts on the FMJ changes – also, are there any other exploits on Shadows of Evil zombies that you want Treyarch to look at?