We have a word of warning to all gamers who have previously pre-ordered the Black Ops 3 PS4 Digital Deluxe directly from the PSN store. Sony has sent out emails to customers confirming that Digital Deluxe Black Ops 3 pre-orders have been cancelled due to a pre-order content issue.

We knew that some PS3 owners had received this email last week but now we can confirm that it has just happened to PS4 orders as well.

Firstly, take a look at the official statement that Sony sent out online regarding the PS3 Black Ops 3 Digital Deluxe cancellation. 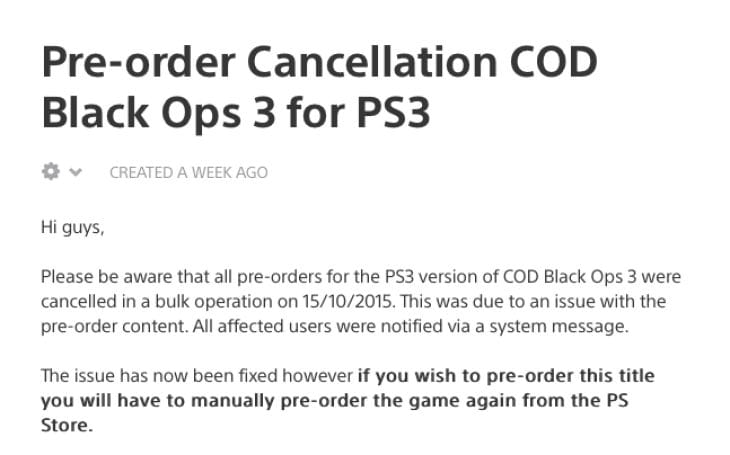 Sony states that refunds had been sent out and the cancellation was due to pre-order content issues which had already been fixed – meaning that customers could simply purchase the content again to solve the problem.

We know that in a matter of hours many of you will be wondering ‘Why has the Digital Deluxe version of Black Ops 3 been cancelled on PS4?’, so this will be a heads-up for you.

Make sure you double check your PSN wallet to ensure that your funds have been refunded to your account before buying the Deluxe Black Ops 3 Edition again as obviously you don’t want to be charged twice.

Did you get the same email from Sony hours ago? Let us know your status in the comments section and whether the refund has already reached your wallet.