We have some important information for Black Ops 3 buyers now, especially those picking up on PlayStation. Treyarch has just revealed an exact Black Ops 3 PS4 beta date, re-confirming that PS4 users will get to play the beta before those on Xbox One.

After so many years of exclusivity on Xbox, this is going to be a shock to the system we expect for some Xbox owners out there.

Especially given the fact that in Treyarch’s announcement Tweet, they didn’t even say when the Black Ops 3 Xbox One beta will start. 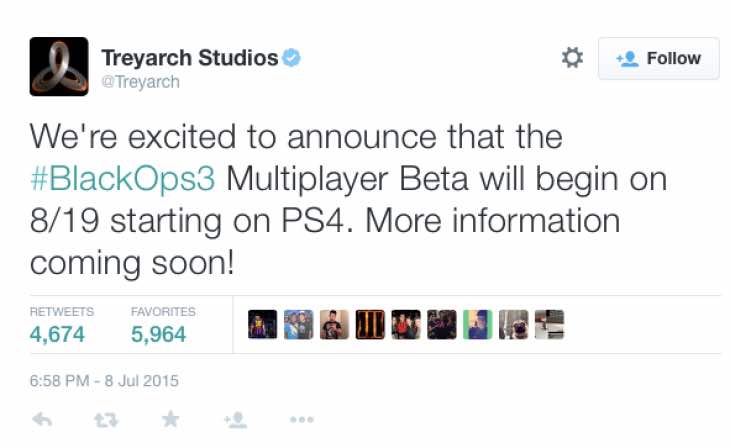 We’re guessing that this is on the request of Sony and following on from the comments at E3 when Andrew House said that PlayStation is now ‘the home of Call of Duty’.

Without further ado, we can tell you that the Black Ops 3 beta start date on PS4 is August 19. Since Xbox hasn’t been mentioned, we are presuming that the exclusivity period will be one week at the earliest or one month at the latest.

Treyarch states that more information is coming soon, which could come during the Black Ops 3 zombies reveal later on Thursday.

If you own a PS4 and Xbox One give us your thoughts on this. Xbox One, are you surprised that there is not even a heads-up on how long the PS4 exclusivity lasts for the beta?