We have just hours to go until the start of the Black Ops 3 PS4 beta. Many of you will currently be wondering how to get your Black Ops 3 beta code after already pre-ordering the game and now we can give you a reminder of this.

Treyarch has already confirmed recently that codes will actually be handed out on the day to registered email accounts. It is going to be an extremely busy day for sure and we’re hoping that the servers can deal with the massive traffic coming Treyarch’s way.

There’s also the issue of some players with codes already, having problems actually trying to redeem them as you can see in a previous article.

You’ll need to know that the Black Ops 3 beta codes will be delivered after 12am Pacific time. That’s 3am Eastern Time and 8am the following morning in the UK.

As far as we’re aware, once the codes are live you are then free to download the Black Ops 3 beta client from the PlayStation Store. 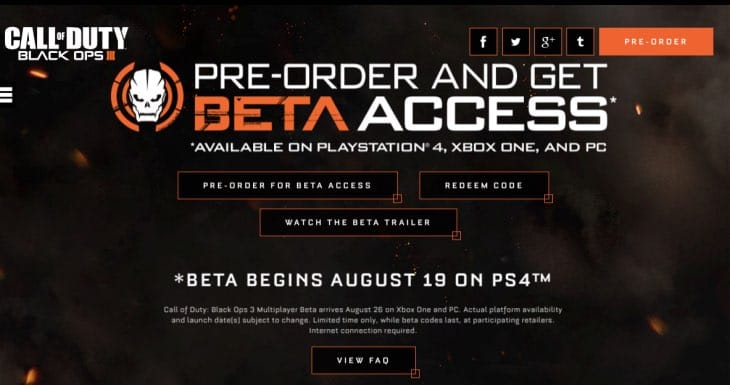 Before you do this, remember that you will first have to redeem your Black Ops 3 beta code on Activision’s website here for another code that will work on the PlayStation Store.

If you have bought the game digitally you shouldn’t have to insert any codes and as soon as the client is available you can start to download from 12am Pacific onwards.

Are you really excited about getting your code to play the Black Ops 3 beta on PS4? Remember that the beta is exclusive on PS4 for one week then Xbox One and PC players will be able to enter.

How pumped are you for this after spending months on Advanced Warfare, be honest?