We can see that there has been another stealth PC update for Black Ops 3 over the weekend. This follows on from a similar hotfix update for console owners, but the thing to point out is that Treyarch has decided not to reveal the new Black Ops 3 PC update notes in detail.

We told you recently that a hotfix was deployed for console, bringing the version to 33.19.20 which Treyarch didn’t reveal patch notes for ‘officially’, but did give console owners a heads-up via Reddit.

Unfortunately, the same generosity hasn’t been afforded to PC players. Many of you may be wondering what the new BO3 update on PC does as this is the only description left by Treyarch on Steam:

While the lack of notes is frustrating enough, some of you have been having problems with the PC version of this game specifically after installing the update.

Complaints are continuing to come in on this Steam thread and it has led to one of Treyarch’s PC developers listing one fix for those that are specifically having an issue playing Black Ops 3 with Windows 7. 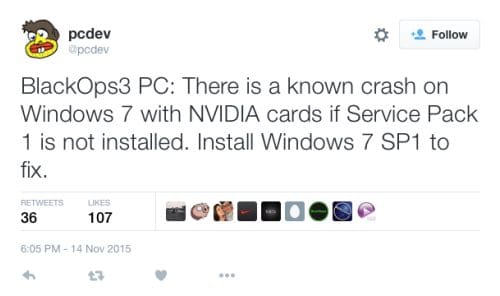 Are you annoyed that there has been no detailed notes, given that console owners still received information about a hotfix over the weekend?

Let us know if you have had any problems with the game on PC, after installing this update.