We have some more exciting rumors on the possibility of fan-favorite map Nuketown coming to Black Ops 3. Now, it looks like a Black Ops 3 Nuketown 2065 map is definitely happening – but it could come to the game as ‘Nuk3town’.

We first told you about Nuketown Black Ops 3 rumors back at the start of July after a concept image was doing the rounds on social media.

Now it appears we have some more legitimate information to suggest that this map is returning. An image from the Brazilian PSN listing for the Black Ops 3 Digital Deluxe version of the game has name-dropped the Nuketown term.

On this listing, it states that the NUK3TOWN map for Black Ops 3 is coming and the description reads that Nuketown will be “completely redesigned to highlight the new chained motion system based on momentum of Treyarch, providing battles full of adrenaline”. 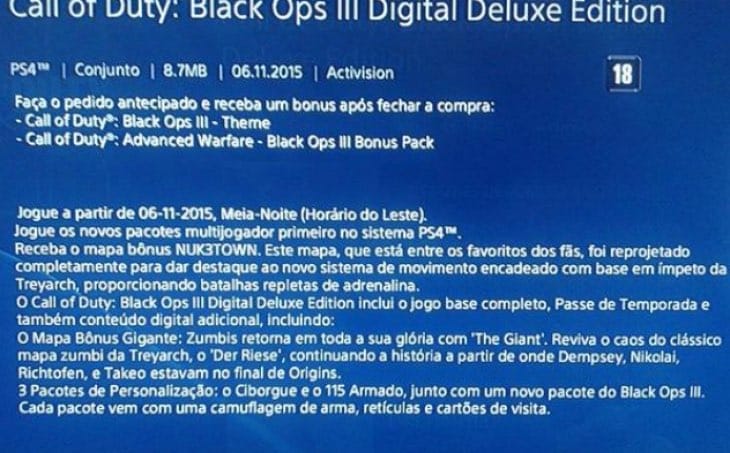 As for why it is called NUK3TOWN remains to be seen, if true. The 3 may well represent the third iteration of Nuketown since Black Ops 1, but we’re guessing Treyarch will be spilling the beans once the beta is finished up on all platforms.

Hopefully we’ll see some more evidence that this is true as we’re sure most of you want to secure your pre-order to get this map as soon as possible.

Will you be unhappy if the NUK3TOWN map is exclusive to the $100 Digital Deluxe version only, or will you still buy it anyway?