We have word from Treyarch that the Black Ops 3 multiplayer experience is going to be significantly different this time around.

We’re not talking about Specialists either. We’re talking about the fact that Treyarch has just confirmed that there will be no riot shields at all in Black Ops 3 multiplayer.

If you played BO2, you’ll know that this became a big problem for many users as it created a negative atmosphere in servers when players would just ‘troll’ other players for the fun of it. 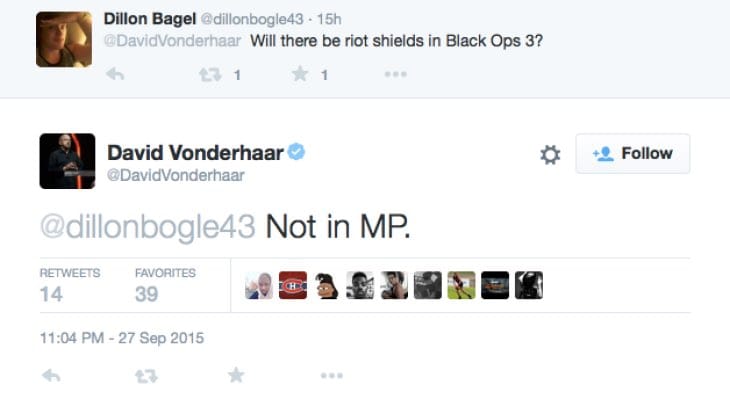 Some users would simply just all equip shields and ruin the experience of a particular map, so now it looks like Treyarch are planning to eradicate this kind of play from their upcoming game.

You can see the Tweet above from Treyarch’s David Vonderhaar to see that this is a confirmed thing in preparation for launch.

Obviously those that love spending their time on Call of Duty servers with nothing but the riot shield are going to be unhappy about this – but you can’t please everyone.

We think this is one aspect which the majority will actually be happy about. Let us know what you think of the permanent removal of riot shields in Black Ops 3 multiplayer – is this a welcome change for you or not?