We have a word of warning to all Black Ops 3 players now, as it looks like some players are finding even more ways to use Black Ops 3 cheats to gain an advantage over other players online.

This time it is Black Ops 3 level 1000 glitches, as you may have noticed a large number of players who have 1000 next to their level in lobbies.

It is true that there’s a way to reach 1000 legitimately after a master prestige update, but since the feature was recently added there is no way that groups of players would be at 1000 already.

As a result, people are using a Black Ops 3 hack or glitch whatever you want to call it, to gain level 1000 easy and unlock every single piece of content in the game – including Black Ops 3 dark matter camos. 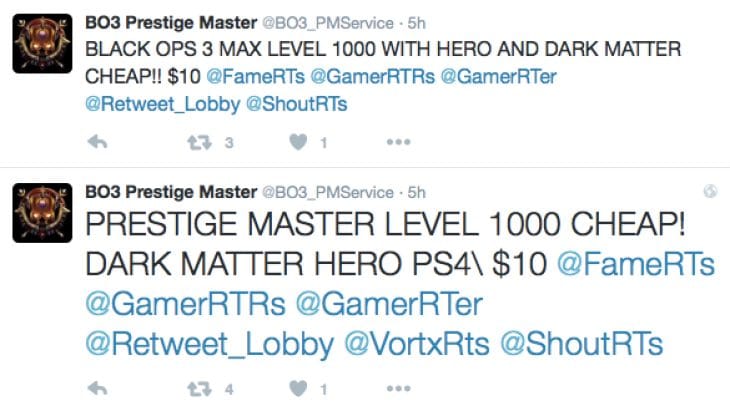 You can see the level of desperation that this has caused within the community, as there’s now been several Twitter accounts set up who are actually SELLING Black Ops 3 level 1000 accounts for a one-off $10 fee.

It’s pretty hilarious truth be told that these players think that they can go under the radar, not to mention the stupidity at the same time given that there’s a report button for players to simply let Treyarch know.

The developer is already waving the ban hammer due to the level 1000 BO3 glitch as you can see here – where one user was delightfully issued with a full ban rather than a stats reset.

Will these people ever learn? Let us know if you have seen a sudden ‘increase’ in the amount of level 1000 players in your lobby.

We’ve seen them personally running wild on Asia servers, so is it happening in your region too?