We have some sad news to bring to old console owners now, as we can confirm that there will not be co-op in Black Ops 3 on PS3 and Xbox 360, or any single-player mode for that matter.

This is obviously a major thing for those that still refuse to upgrade and now it means that you will only be able to play multiplayer or zombies.

In other others, there is no single-player campaign for PS3 or Xbox 360 versions of Treyarch’s game and we can already see that there has been a fierce backlash over this.

The reasons for the exclusion is obvious – the PS3 and Xbox 360 hardware can’t support the intensive 1-4 player co-op campaign in Black Ops 3. 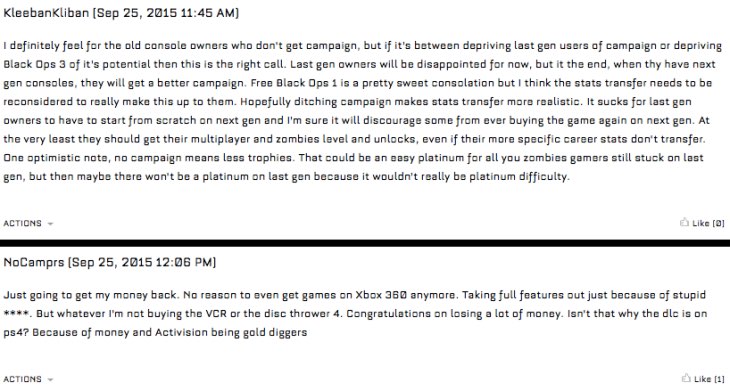 Treyarch has outlined this in black and white in a new blog post and have also said that PS3 and Xbox 360 players won’t be able to enjoy the Black Ops 3 weapon paint shop or ESports features either – for the same reason.

To get an idea of the frustration, you can head to the link above and read the comments underneath Treayrch’s statement – we can see that some are already threatening to get an immediate refund.

To be honest though, many will say that last-gen owners are lucky to still get Call of Duty Black Ops 3 Zombies, let alone co-op. It’s the same argument on what PS3 and Xbox 360 believe they should be entitled to, despite the fact that many have now switched over to more expensive PS4 and Xbox One consoles.

What are your thoughts on this, do you support Treyarch’s decision to drop all aspects of single-player for last-gen console owners or not?