It looks like there may be a possibility of a new Black Ops 3 Double XP Weekend for January 8 2016 to January 11. It’s not 100% confirmed yet, but Treyarch’s David Vonderhaar has revealed that it is currently being ‘negotiated’.

After Double XP was missing over Christmas, many players feel that another Double XP Weekend for BO3 is overdue and this week would surely make up for it. 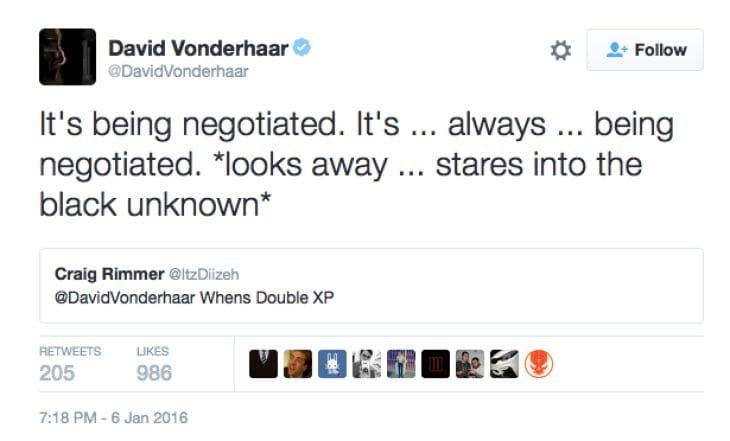 Take a look at the reply that David Vonderhaar gave above when a player asked him when the next Double XP weekend for Black Ops 3 is out.

Obviously it’s up for interpretation on whether this relates to Double XP being activated this weekend, but hopefully everyone will hope that to be the case.

If so, then we shouldn’t have too long to wait for a confirmation from Treyarch, but we’ll keep you updated nevertheless.

Do you agree that it is a good time for another Double XP Weekend for Jan 8-11 2016? Give us your thoughts on this below.