We finally have some official news to bring you with regards to the highly anticipated Black Ops 3 DLC 2 trailer date and also news of a BO3 DLC 2 gameplay live stream as well hosted by Treyarch. Update: We have the start time for the BO3 live stream on March 31 below.

We knew that the content would be out early April and now Treyarch are going public with the information. A Tweet from the developer confirms that there will be gameplay from the new BO3 DLC 2 maps as well as zombies on Thursday March 31st. 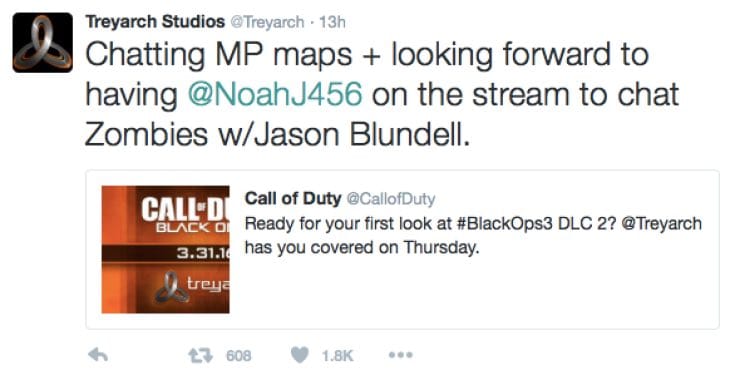 Many of you will be asking what time is the Black Ops 3 DLC 2 live stream on Thursday, but Treyarch hasn’t announced a set time yet so we’re assuming this information will be revealed soon.

With Treyarch hosting the live stream on Thursday, we are also expecting the DLC 2 trailer to go live at the same time as well.

Does this mean that a BO3 DLC release date is almost confirmed for Tuesday April 5? Let’s wait and see but it is looking good guys.

Update: Treyarch has now confirmed that the live stream will start at 11am Pacific Time on Thursday. Even better is that you can also use the in-game BO3 Live Event Viewer to watch all of the action for added convenience.

Not long to go now, excited?