There is a lot of anticipation in the air at the moment, with Treyarch making fans sweat with regards to the Black Ops 3 DLC 2 release date. Now, we can see that speculation is really heating up after an apparent ‘leaked’ image suggests that the BO3 DLC 2 could be called ‘Ignition’.

Treyarch nor Activision have announced anything yet and don’t forget we have only just had the content launched on Xbox and PC platforms.

PS4 players are already thirsty for more though after Awakening and you can see the image that is currently doing the rounds all over social media below. 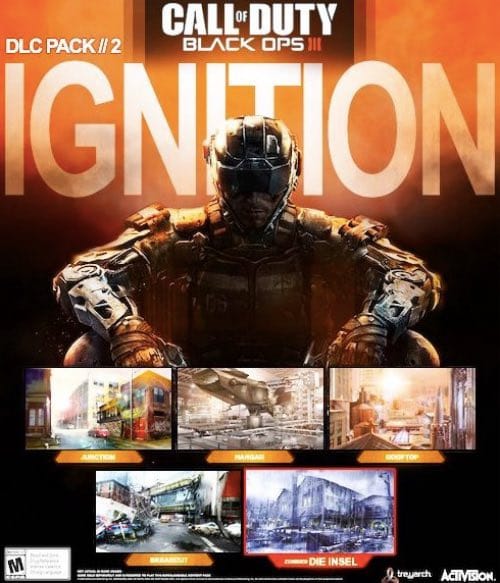 If true, then we could see four new multiplayer maps that are called Breakout, Rooftop, Hangar and Junction. More importantly though, this poster claims that the next Black Ops 3 zombies map will be called ‘Die Insel’.

When translated from German this means ‘The Island’ which apparently backs up other rumors suggesting that the next zombie map is going to be set on an island.

Having said that, you should be well aware how easy it is to create these kinds of images on photoshop. With that in mind, we suggest you to take the image with a grain of salt and just treat it as an interesting rumor for now.

Would you like the sound of these four maps though and a new zombie map on an island after Der Eisendrache?

Don’t forget that Ignition or whatever it will be called could be out on this date.