We have a last minute heads-up for all the gamers out there who are rushing to buy Black Ops 3 online at Amazon UK. You’ll be pleased to hear that Amazon do have an exclusive version of the Black Ops 3 in the UK, but you’ll need to pay slightly more than the standard version.

If you pay £46.99 at Amazon UK, you can buy the Black Ops 3 Steelbook Edition which comes with the exclusive Black Ops 3 ‘Take-Out’ weapon camo to use in multiplayer.

It looks really cool as you can see from our included image below and as far as we’re aware it is only available with this version from Amazon. 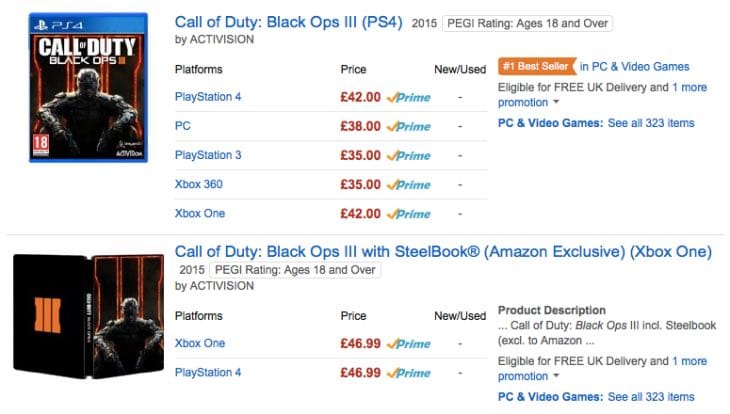 You can still buy the standard version of Black Ops 3 at Amazon UK for £42, but you won’t get the camo included and don’t forget that neither versions come with Nuketown either.

Still, the Steelbook looks very nice so let us know if you are interested in getting this in time for the launch of Black Ops 3.

To buy it right now, head to the Black Ops 3 PS4 Steelbook Edition here, while the standard edition of BO3 on PS4 can be bought here. Are you ready for an epic Black Ops 3 weekend?