Have you ever wondered what the masterminds at Treyarch are thinking when they sit down and build their zombie mode from scratch? A new video has surfaced online, giving you an insight into the thought process behind Black Ops 2 zombies which will be available for all to play on November 13.

The latest episode of Game Trailers bonus round features Treyarch studio lead Mark Lamia, Jimmy Zielinski the design director for zombies and Dan Bunting, who all talk about how zombies first grew from a small expansion into its own fully fledged mode which arguably is the only reason why many fans are getting the game in the first place.

There’s included clips of past maps in the franchise, including a pleasant reminder of the flamethrower weapon which has yet to be confirmed for the new game. There is the interesting admission from the Treyarch leads that ever since World at War zombies, they had always thought about the possibility of players being able to actually play as the zombies against humans, and again left this up in the air for future games. 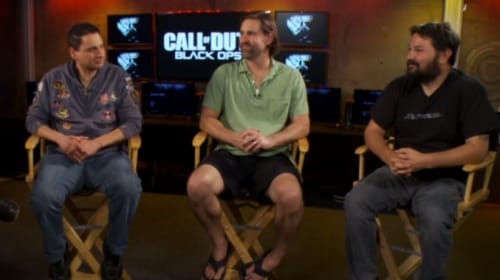 Jimmy Zielinksi also makes a nice point to mention that Treyarch is always listening and ‘watching’ the community for extra ideas to put into zombie mode, even if they do not directly meet face to face or engage in any official Q&As. It goes without saying that there are always thousands of crazy ideas on zombie forum boards, so it should be pleasing for some of you if you have shared an idea in the past that has found its way into the game.

As for new features, Treyarch unsurprisingly are still reluctant to dish out the juicy specifics, but they did confirm in the video that the new players will all have abilities to use and there will be all new types of zombie to contend with as well. We also hear how different areas in Tranzit zombies will have to be ‘earned’, with players unable to just freely move around at will with everything accessible from the start – then again, zombies has always been locked away in that essence.

Take a look at the clip below, it’s not majorly exciting but it is definitely worth a watch if you appreciate the analysis that goes into a game from a developers point of view. If you are looking forward to playing Black Ops 2 zombies on November 13, let us know what you hope to see, in terms of new weapons and features.