We are just hours away from the world premiere reveal of Treyarch’s new zombie mode in Black Ops 2. So far we have only seen single and multiplayer for the game, but like previous tradition – zombies is being kept until last for one final excitement rush before release.

Treyarch will be officially revealing zombies on Wednesday September 26, but in the meantime two new screenshots have been released showing further teasers for the upcoming mode. This follows on from our previous report, where we told you that the zombies viral campaign had already begun by Treyarch releasing several mysterious video clips on the official Call of Duty YouTube channel.

The screenshots themselves are nothing too special, but it does include one interesting talking point that may become a major feature in one of the new maps. One of the images includes a public bus, which tell us that you’ll be able to use the bus to get to various locations on the map.

This is pretty exciting, as it also gives the impression that Black Ops 2 zombies is going to be more of an open-world affair as opposed to the first game which was largely restricted to indoor maps and close encounters. The other screenshot looks a lot like the underground section from Call of The Dead and the graphics are nothing to get excited about either. 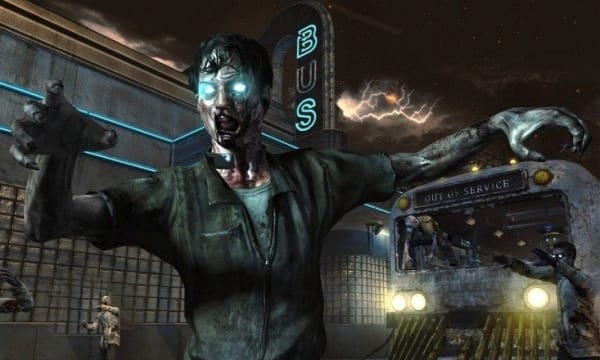 Zombies is zombies though and it’s still going to be the main reason why everyone will rush out to pick up Black Ops 2 at a midnight launch. Treyarch are very good at mixing gameplay up to make it a fresh experience, and the new futuristic multiplayer setting actually looks like it could be a lot of fun as well- compared to Modern Warfare 3.

What are you expecting to see from the zombies premiere gameplay trailer? Will you just be happy to see new maps and weapons, or are you hoping to see a complete revamp with a drastic change to the format in which zombies is played? We already know that a zombie campaign is coming, so it’s going to be a big shake up this time around anyway.

Don’t forget to check the official zombies YouTube channel for further teasers until the main reveal.