Following on from the huge reveal about the Care Package and Hardened Editions of Black Ops 2, Treyarch has now released a useful unboxing video, giving you a sneak peek at what is included in the Care Package edition, including a brief look at how the remote control MQ-27 Dragonfire Drone will operate.

The remote control quad rotor is easily the highlight of the premium edition of Black Ops 2 and for an total asking price of $180, fans are obviously expecting to be wowed by Treyarch. The developers have done their best to big up the luxurious items and you’ll see the exact scale of the Care Package you’ll have to take home with you if picking one up from retailers.

It’s a big unit indeed and you might want to make a quick exit before you get people trying to ransack your bounty in the street. The quad rotor drone looks impressive and the clip below lets you see what it looks like in flight, with Treyarch’s David Vonderhaar even flying it in a way so that it can land in his hand. 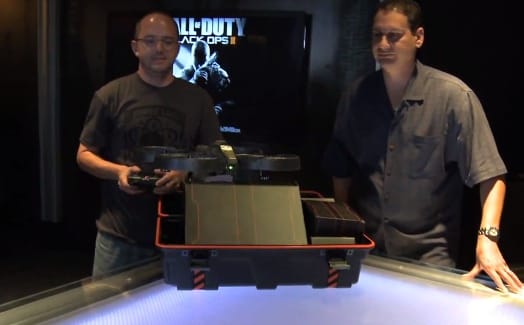 Aside from the drone, there’s plenty of other goodies on offer, including various downloadable items, some limited edition coins with in-game codes on them and of course the other two main highlights in the Care Package. You’ll also be getting access to the exclusive Nuketown 2025 multiplayer map which is set in the future from the original favorite in Black Ops 2.

If that wasn’t exciting enough, the masterminds at Treyarch have said that it was purely down to listening to the community that they decided to unleash Nuketown zombies as well. Just to clarify for those that are still unaware, this Nuketown zombies map is going to be exclusive to the Care Package and Hardened editions, so you won’t get it if you have already pre-ordered the standard edition of the game that just includes Nuketown 2025.

After seeing what the quadrotor drone looks like in-flight, are you planning to drop $180 on this?