While Treyarch has now unveiled their single player, multiplayer and zombie maps for Black Ops 2, one aspect that they haven’t talked about yet is the popular return of Nuketown, which is going to be given a futuristic makeover as it morphs into Nuketown 2025 for the new game.

Thankfully, they are not completely cruel, as they have decided to release a snippet, just a snippet of what everyone will be in for when the game launches on November 13. We say snippet, but it’s actually more of a tease which only lasts 5 seconds. It shows the familiar Nuketown environment, which now has added futuristic props, such as a ‘Hydro’ car and a mannequin of a woman, which firmly gets blown to pieces by the incoming nuclear blast. 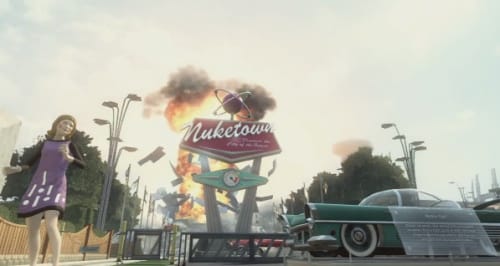 There doesn’t appear to be a school bus in sight from the original map, but it has kept its overall look and feel which gamers will remember playing endlessly on gun game, as they looked to take the enemy out with crossbows and ballistic knives from window to window.

Just to remind those of you who are still unaware, the map will only be available if you pre-order the game before launch, as it won’t be available for purchase any other way – at launch that is. A Nuketown FAQ on the Call of Duty website adds that the Nuketown map isn’t DLC locked on the disc, but a download that can only be unlocked by pre-ordering the game and isn’t attached to your Elite subscription in any way.

The question is, have you pre-ordered the game to take advantage of the Nuketown 2025 offer, or did you not like the map from the first game anyway? Don’t forget that a zombie version of Nuketown is also on the way as well, but Treyarch has unsurprisingly stayed silent on any details regarding this for the moment.