Treyarch are preparing to unleash the new Black Ops 2 zombies mode on November 13 and to build up excitement for the big day, the developer is continuing to tease gamers with little reveals to keep eager zombies fans happy.

We have seen little teasers showing the new bus that will be used for transportation methods in Tranzit zombies, but now Treyarch has released a new screenshot which should be of interest to anyone who’s played zombies on Black Ops or World at War.

The infamous mystery box is making its glorious return for Black Ops 2 zombies and you may be surprised to hear that there doesn’t appear to be any changes made to the box and it’s appearance remains exactly the same as how you remember it from Black Ops. Not that it’s necessarily a bad thing of course.

We would have liked to have seen a new system put in place as to how gamers can pick up random weapons around the different zombie maps, but Treyarch has ultimately decided that the weapon box should be one area that remains unchanged from previous games. 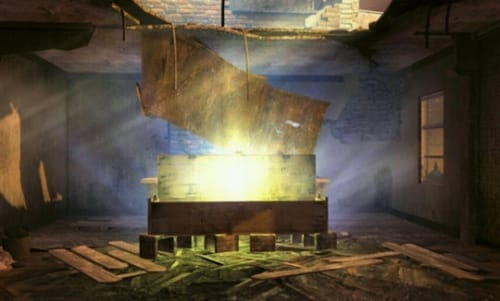 Do you support this decision from the developer, or do you agree that a different weapon system would have been more interesting? We’ve already seen a few complaints about the weapon box remaining the same, but let’s not forget that the other areas of zombies have been improved drastically – Tranzit zombies is basically a campaign mode on top of the standard survival modes, and there is the new 8 player zombie mode as well.

The weapon box may be the same, but we still can’t wait for zombies regardless. If you are a seasoned zombies pro, let us know your thoughts on the same weapons box appearing in Black Ops 2.