Every year, the Eurogamer Expo manages to produce some big names to make the ticket worthwhile and it looks like fans are in for another treat this year. Treyarch has just sent out a bombshell Tweet, confirming that Black Ops 2 is going to be playable ahead of its November 13 release date.

Just to put this into perspective for you, it means that all attendees are going to get the chance to play it a few weeks early, as the Expo will kick off on September 27 at London’s Earl’s Court – the same venue as last year. There’s no details on what element of Black Ops 2 will be shown at the event, but we’re guessing it will be a toss up between single player and multiplayer.

Although it would be fantastic if Treyarch took Black Ops 2 zombies to the event, we highly doubt they would give London the world premiere for Black Ops 2, as they usually reveal the mode just before launch with an exciting trailer that usually airs during a major US TV spot.

Having said that, just having the chance to sample Black Ops 2 in playable format two weeks before everyone else is exciting enough and it’s clear that Treyarch are pretty excited about it themselves. Here’s a Tweet from lead designer David Vonderhaar making the news official: 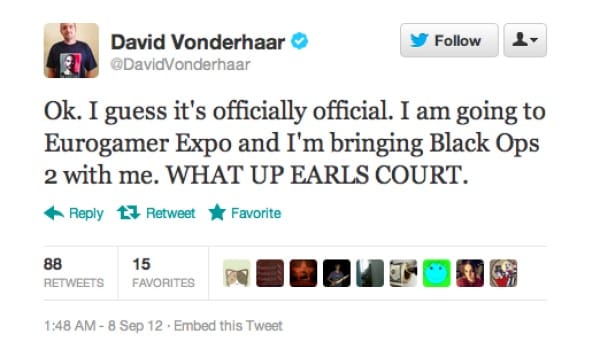 We’ve seen plenty of single player action for the game, so are you hoping that Treyarch gives attendees a chance to play one of the multiplayer maps? Although not allowed, it will probably also mean that a collection of gameplay videos will turn up on YouTube after the event is over, so those who don’t have a ticket can see the game at the event online.

Black Ops 2 now appears to be the pick of the bunch at this year’s Expo. So far we don’t see the playable list eclipsing last years, which included the likes of PS Vita, MW3 and Battlefield 3. However, there’s still some big titles that will be playable – Halo 4, Crysis 3, Assassin’s Creed 3, Dishonored to name a few.

We’ll be at the event on September 27, so look forward to our Black Ops 2 hands-on preview shortly afterwards. The question is – do you have your ticket already? If so, let us know if you would like to play Black Ops 2 single player, multiplayer or zombies. You can check out what’s on at the Expo here.