At the end of last month we spoke about the ongoing wait with gamers constantly asking when Black Ops 1 backwards compatibility is out on Xbox One.

Now, it looks like we have our first substantial rumors for you which suggests that the Black Ops 1 Backwards Compatbility release date could be sometime in February 2016.

Microsoft has not revealed the Xbox backwards compatibility February 2016 update yet, but remember they recently said that they would now be switching to a new release format of launching games as soon as they are ready from the respective developer.

With this in mind, take a look at the screenshot below from Twitter, which shows an apparent Twitter exchange between user EpicSpud99 and Xbox Support. 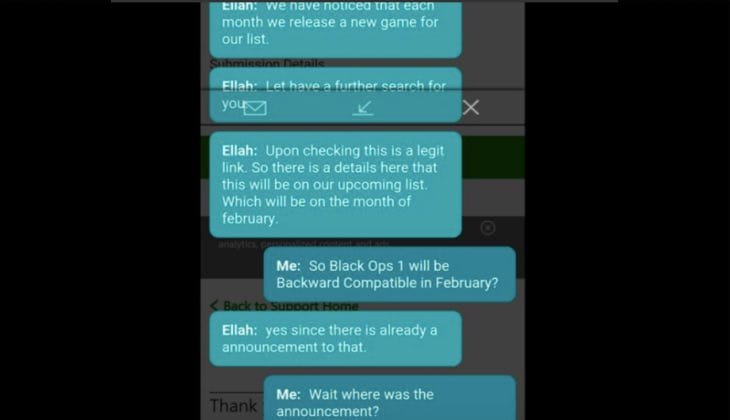 Pay attention to the fact that Xbox Support seemingly confirms Black Ops 1 for February, despite the fact that there has been no official announcement from Microsoft yet.

You should obviously take the screenshot with a pinch of salt for now, but then again a second screenshot from Spanish site Xbox Solo goes one step further.

According to the image, some users in Spain were recently able to download the Black Ops 1 Annihilation map pack onto their Xbox One.

Is this good enough evidence to suggest that Black Ops 1 backwards compatibility is ready for download and will be going live very soon this month? – Let’s hope so.

Give us your thoughts on this and whether you agree this would be a lovely treat on top of the games already being offered for February Games with Gold.