It has been over two weeks now since EA DICE unleashed the Back to Karkand DLC expansion pack for Battlefield 3. Prior to this pack landing on the PlayStation 3, patch updates for the game were fairly frequent, although now things seem to have died down a little.

That doesn’t mean to say that PS3 online multiplayer is problem free, far from it actually as there are some pretty serious bugs that need fixing, and we just hope that DICE has acknowledged them all and are planning to sort things out by the time the next patch update arrives.

While we probably have missed a lot of issues that are going on in the game, we are going to list a few that we have noticed – issues that are very frustrating when playing the game since one minor hitch can obviously mean the difference between life or death.

One problem we have noticed is a strange bug involving the QBU-88 auto sniper rifle, a new weapon that you’ll get by completing one of the Back to Karkand assignments. The bug renders the gun completely useless as the aiming system disappears as the player seemingly holds the gun above his or her head, making it impossible to aim down the sights – leaving a no scope shot the only option. 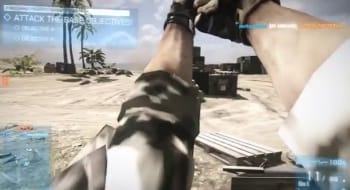 Another issue which you have problem noticed as well, is the thermal vision sight when zooming in with the BTR-90 tank. It definitely doesn’t feel as normal as the LAV-25 thermal aiming in comparison, so we’re hoping that DICE fixes this in the next patch update as well.

Other minor issues that we feel need a fix to the game, include being able to look at your assignments in between rounds, and also being able to quit a game straight after a match or on the loading screen – why this wasn’t included from the start is beyond us. We’ve also seen instances in some games when matches begin without the player receiving their regular loadout – i.e, spawning with level 1 guns and equipment – again a frustrating bug which shouldn’t be there.

Have you experienced all of these problems as well? Remember that these are just happening on the PS3 version at the moment, but they may also be occuring on the Xbox 360 and PC versions. If you have spotted any other serious looking issues with BF3 that DICE seems to have overlooked, leave us a comment below.