Earlier this week we informed you that DICE had finally issued a major fix to the PS3 version of Battlefield 3 adding proper support for VOIP, but now we have the first details on what the team are working on next and what tweaks are likely to make it into the next update.

While PC gamers continue to play Battlefield 3 with minimum problems, the same cannot really be said for the PlayStation 3 version. There are still one or two lingering problems that are the cause of much frustration amongst console players, this of course aside from the fact that the PC version of the game is lead platform with bigger maps and player support, as well as extras such as Commo Rose which isn’t available on console yet.

On a pleasing note, the long requests for a VOIP fix have now been answered, as the recent 1.03 update specifically aims to target this for all PS3 users. One other issue on the PS3 version that hasn’t been addressed yet though is input lag. For those of you that don’t know what this is, it’s the duration of time that the game takes to register a command on the PS3 dual shock, and countless gameplay videos have demonstrated that both the control and game do not sync at the same time.

To give you an idea of just how serious some people are treating this, there’s even a website that has been set up showing the problem at close hand, plus feedback from DICE so far. This week we have heard from Battlefield community manager Daniel Matros about the input lag problem, and he confirmed that the team are still working on a fix, but unsurprisingly no indication of a release or if it will feature in patch update 1.04. 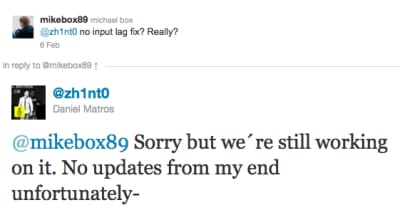 Other aspects that DICE are looking into for the next update is the MAV and Mortar. Battlefield 3 players will know that the MAV is particularly annoying since it doubles up as a tool for performing roadkills, but it can also be exploited to boost teammates to higher grounds, effectively giving them an advantage over everyone else below.

What are your thoughts on the input lag on PS3, as well as MAV roadkills? Are these two aspects that definitely need to come in patch 1.04? There’s nothing more annoying than playing on Operation Metro on console, to see one player camping at spawn with 24-0, all with MAV roadkills. Let’s hope it gets tweaked sooner rather than later.