If you are currently playing the Battlefield 3 Back to Karkand DLC expansion pack, you may have noticed that DICE has scattered all kinds of easter eggs on the Wake Island map. The most obvious of these are the dinosaur figures which we told you about earlier, but one new secret has been discovered, and it could reveal DICE’s future plans after Battlefield 3.

First of all, if you want to find the six dinosaurs that are hidden throughout Wake Island, check our previous article here for full details. It turns out that Wake Island holds all sorts of goodies for Battlefield fans, including another notable teaser in which DICE thanked BF veterans for playing Wake Island on previous BF games such as Battlefield 2 and 2142.

Now though, another discovery has been made and as you can see by a screenshot below, DICE may be planning to make a sequel to the popular Battlefield 2142, as detailed by BF3Blog. You can see the numbers clearly marked as ‘2143’ and judging by the frequent number of easter eggs already contained in Wake Island, we’d say that there’s a good chance that DICE will be following up on this.

Battlefield 2142 was a science-fiction game set in the 22nd century and it was the first ‘future-combat’ Battlefield game to release. The game came out after Battlefield 2 in 2006, and the possibility of a new game utilizing the brand new Frostbite 2 engine will be nothing short of mouthwatering for fans who played that game.

We’ve heard some whispers online that this easter egg could be related to the next DLC slot in the Battlefield 3 options menu after Back to Karkand. However, we would love this to be a fully fledged game instead, as it may be a bit strange if Battlefield 3 suddenly jumped to future combat.

What are your thoughts on these rumors – do you have fond memories of Battlefield 2142 or not? Don’t forget to check out the best BF3 kill ever here. 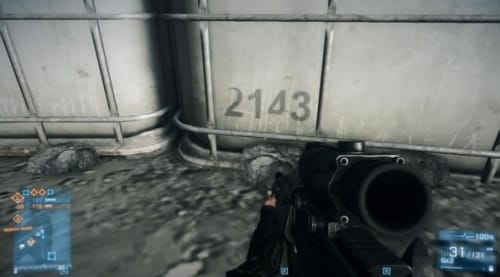