We are now approaching the big day for Battlefield 3 Premium owners on the PS3. The Armored Kill DLC expansion is due to go live within a matter of hours and naturally everyone wants to know what the exact release time will be.

Unfortunately, it appears that even DICE doesn’t even know though, as they have been responding to questions on their official Twitter account stating that there ‘isn’t an official release time’ for Armored Kill.

It’s a bit odd since DICE should roughly have a time themselves when they want the pack to go live, but at the moment they are just redirecting all release time questions to their official website for more information. 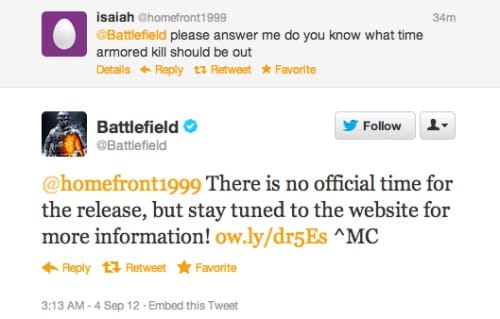 Aside from Armored Kill landing, there is also another huge patch coming to accomodate the new content. It also makes significant changes to the base game and there’s definitely some big talking points that is likely to affect the way you next play the game.

For example, they are no longer giving the chopper gunner flares to use, as they believe it is too difficult for soldiers on the ground to lock on with two sets of flares deploying each time. We welcome this change as it makes it a lot more easier to get a successful lock on, while at the same time, making the chopper pilot work even harder to ensure he or she flies low enough to avoid lock ons while their flares recharge.

The other big change that we can see is that they have given a much needed update to the scout helicopters. Now the 4th seat of the scout choppers will act as a CITV station, allowing teammates to lock on to targets using a laser designator – providing they have unlocked it for the scout helicopter first. This is an excellent move by DICE in our opinion as it allows the passengers to help the pilot out a lot more, rather than just bailing as soon as you’ve been hit.

As expected, there is the usual multitude of weapon fixes too – some you’ll be happy about, others not so much we expect. The popular M16A3 has now been given increased recoil to make it less overpowered, while the M5K has had a much needed damage increase too, which hopefully should make players use the weapon a lot more.

Mobile AA vehicles have been tweaked yet again, with DICE this time saying they were ‘overnerfed’ last time. They’ll now do increased damage to infantry again, while you’ll be pleased to hear that the damage against tanks has also been increased as well.

At the time of writing, both the Armored Kill pack and the Multiplayer update 4 are not live on the PlayStation 3 yet – we’ve checked the Asia and US PlayStation Stores. Are you a little disappointed that DICE has said that ‘there isn’t an official release time’? It essentially means that we could be waiting a long time yet until the pack drops. How hard would it have been to give an estimated period at least?

As we wait for Armored Kill to land for PS3 Premiums, let us know your thoughts on this new patch update which is live today across all platforms. The full patch notes are on Battlelog here.