In October of last year Apple hosted the Back to Mac event, which not only covered details on apps for Mac but also a new OS to boot. We can now tell you that four months on beta seeding for Mac OS X Lion is to begin soon, and that version 10.7 will have a UI change as well. We still do not know much about this new operating system, but you can be certain that it will be something special.

However, what we do know is that Lion will take some of the best ideas from the iPad and then implement them on the Mac. You can be sure that this will not be the only new feature, and that many more will make its way onto Mac OS X Lion 10.7. We are so happy to hear that developer seeding is about to begin, and it was TechCrunch who made a point of explaining that the user interface will see a huge change — what this will be we do not know.

While we do not know much about the OS X update, we believe that developers have been busy in anticipation of the beta seeding, as they need to be ready the moment that it becomes available to them. The moment that it goes live we hope to see a few leaks and screenshots here and there, just to tease us a little. 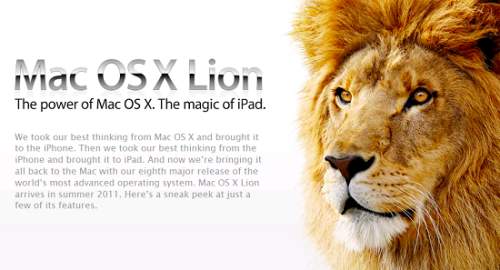 Patently Apple has been doing some digging of their own, and has learned that Mac OS X Lion could come with another added feature, cloud-based FileVault. We have known for some time that Apple plans to up the ante when it comes to cloud storage, and this could be proof that they are much closer to implementation than we all thought.

What expectation do you have of Mac OS X Lion 10.7?