In 2010 we have seen a lot of action in the Tablet PC market, one that perhaps was dead years ago until the release of the iPad. The iPad is definitely the market leader but of course the Samsung Galaxy Tab has kept on plugging away and has reached the sale of 1 million units.

Apple are looking to have shifted 7 million iPads by the end of 2010 but going forward what will be the best Tablet PC screen size for 2011? Well Techtree.com did some surveying with their readers where they asked that the user preference is between 3 screen sizes. The sizes were 5”, 7” and 10”. 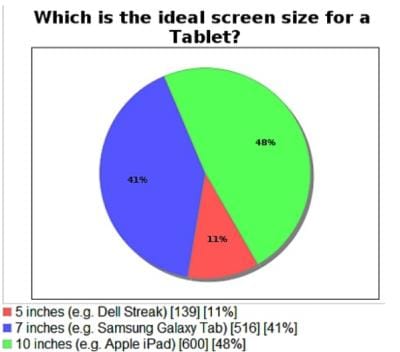 Unsurprisingly the iPad took top spot with 48% of the vote and 600 people opting towards it and that is the 10“, the 5” is the Dell Streak and that took 11% of the vote, 139 people voting for it. The stat that has caught taken the surprise amount is the 7” Samsung Galaxy Tab, the device took 41% of the vote having 516 voters. Steve Jobs doesn’t believe in the 7” but perhaps you users do!

Of course all of the devices have their own set of qualities and disadvantages but we want to know what do you think of the research done by Techtree and what would you choose of the 3 models? Let us know in the comments below.