While the Kinect for Xbox 360 and PlayStation Move are both motion controllers, they handle the task in very different ways and are both after the same market. Originally codenamed “Project Natal”, Microsoft’s jump into gaming that was made popular by Nintendo, includes an add-on peripheral in the style of a webcam. It’s the view of some gamers that Kinect is the most revolutionary controller thanks to the user not having to touch anything, although the PlayStation Move is capable of more advanced motion not possible on the Kinect, and this is thanks to the PS3’s Move having a physical controller.

Sony believes their Move hardware “changes everything”, and it’s their view that the hardware is a new platform, much more than just an accessory. So why is Xbox 360’s Kinect selling much more than the PS3 Move? Some people point to the selection of games on the Kinect as the selling point, while others talk about marketing spend.

We’ll have to agree that both motion controllers need more “killer” games, which are dedicated for the device, although some gamers want Sony and Microsoft to stop “wasting development resources”. This point of view is quite controversial, as hardcore gamers think of motion controllers as kid’s toys, but most of these people haven’t given the devices enough time or hands-on experience to really make an informed decision. Those behind the Move and Kinect would even ask for more money to be spent for better games.

Move gamers look forward to the experience improving given time, and more games like Killzone 3. Others titles pointed out to us from these people include The House of the Dead Overkill, GoldenEye 007: Reloaded, Bioshock Infinite, and Resistance 3.

Some people feel Move hasn’t been as successful, but state that Move has more games. This has been quickly disagreed by Kinect supporters, with some showing lists of games that apparently prove Kinect has the most games. The games list for Kinect includes titles such as Dance Central 1 and 2, Forza 4, The Biggest Loser: Ultimate Work Out, Adrenalin Misfits, Kinectimals, Zumba Fitness, Your Shape: Fitness Evolved, Sonic Free Riders, Fable: The journey, Michael Phelps: Push The Limit, Rise Of Nightmares, Michael Jackson: The Experience, Brunswick Pro Bowling, Kinect Star Wars, Your Party: In Motion, Child of Eden, and Dance Masters. It’s worth pointing out that not all these games are out on the Kinect yet, also some are plain boring.

Sony supporters point out that Move has just as many games, if you’re looking at “support” rather than “required”. The selling point for Move is its precision capabilities, this means a larger variety off genres is needed, especially RPGs. Could you imagine playing Elder Scrolls V: Skyrim with Move support, and if the game played a little like Sports Champions?

At the time of writing it looks like Kinect has the backing of more developers, and this is because it sells more than the Move. Do you expect this to change in the coming year, and what motion controller do you think has the best selection of games? 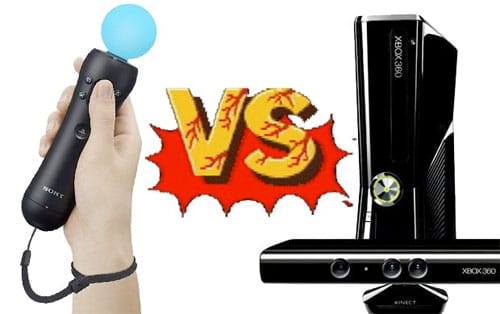