There is no denying how popular the Samsung Smart TV is, and most of this is all thanks to the integration of apps, much like those used on smartphones. Their App Store was launched back in February 2010, and by the end of that year only 1 million downloads had been achieved. Now five months later that figure has risen to 5 million, with the YouTube app topping the list.

The second most downloaded Samsung Smart TV app is Google Maps, with AccuWeather coming in third and Vimeo fourth. These four make up the 550 or so apps in the store, reports TechRadar. Now we know that these numbers seem pretty low when compared to smartphone apps, but you have to consider that this new TV will not be sold as much as the likes of the iPhone.

In the past we explained about how to use Twitter on the TV, as well as the 3D VOD app being launched in the US. You can see that we seem to cover this issue a lot, but it is only because we see the Samsung Smart TV as a game changer in its market. The likes of Sony already has its own version, but we believe that Samsung is on top of its game on this one. 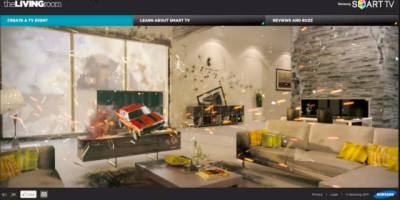 We always like to stay biased on PR, but I have had a number of TV sets over the years and for me I always seem to go back to Samsung. The company seems to have that perfect balance between features and price. We know that there are other brands on the market that say they offer better quality, but maybe you should take a look at their price and then get back to us.

What is your most popular Samsung Smart TV app? Samsung TV’s USA Facebook page can be found here.