It’s been a couple of days now since Apple finally revealed one of the worst kept secrets, and that was the 9.7-inch iPad Pro. We had first thought that all would be different from this model and its larger sibling is the screen size, but it has since come to light that there is less RAM, and the processor has been underclocked – which is a bit of a joke.

When looking at the new iPad, it is very similar to the iPad Air 2 in size, and so you can get away with using the same cases. However there is only one issue with that, it will hide some of the new 12-megapixel camera, and so you will need to find yourself a new case.

There is already a good choice of cases, although if you would rather add some increased protection, then you may want to consider going with a rugged case.

So what are the best rugged 9.7-inch iPad Pro cases? We never found it hard to come up with our own list of best cases for the smaller, iPad Pro, although we know this is just based on personal preference – that and how popular these particular models are for the larger iPad Pro. 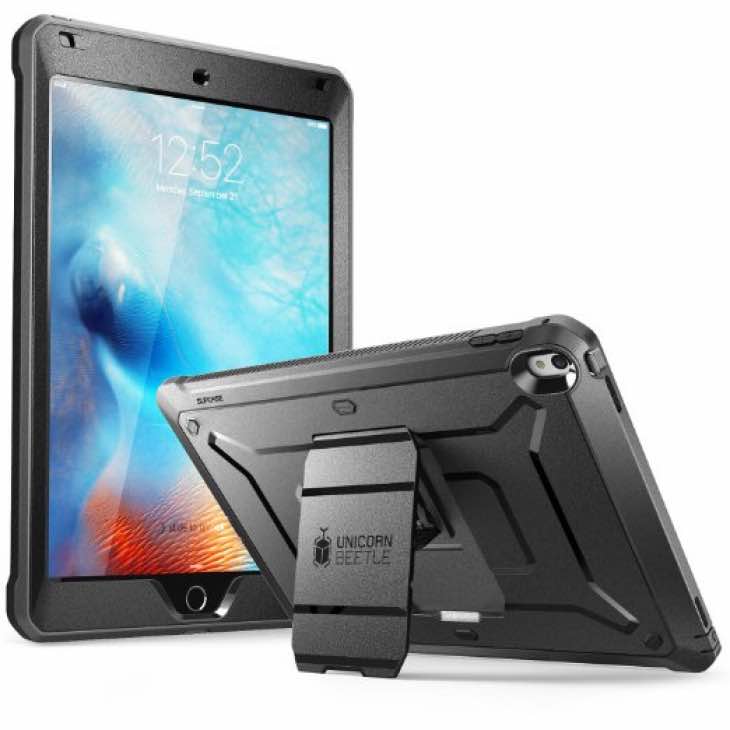 First is the Griffin Survivor All-Terrain case, which is currently showing as out of stock in the UK, but will soon be in and ready for order. This case has been designed to meet Department of Defense MIL-STD-810G, and so will be able to handle much of what is thrown at it so to speak. Full details on this case can be found here, and will cost $79.99.

Next up is the Unicorn Beetle SUPCASE,and while this is much cheaper $19.99. This is till impact and shock resistant, and also comes with a handy stand while watching videos. However, this case is not going to offer the same sort of protection as the one above, although its price does make it a decent alternative for those of you on a budget.

Finally, we have the URBAN ARMOR GEAR, which provides maximum protection, while still being lightweight in its construction. What we really like about this case is its aluminum stand that offers 5 positions. That is not the only benefit of this case, as its only $59.99, making it $20 cheaper than the Griffin Survivor All-Terrain case.

So there you have it, three rugged cases for the 9.7-inch iPad Pro, but which of the three gets your vote?